Try chilling out out at one the city's 700-odd fountains

Summer heat has finally returned to Moscow. And while the city is more famous for ice and snow, it does get its fair share of scorchers. If you're sweltering in the Russian capital on a hot summery day, try chilling out out at one the city's 700-odd fountains. They're not meant for taking a dip (though the “no swimming” signs are often flagrantly ignored) but the spray can be refreshing and the people-watching – priceless. Here are just a few of the highlights: 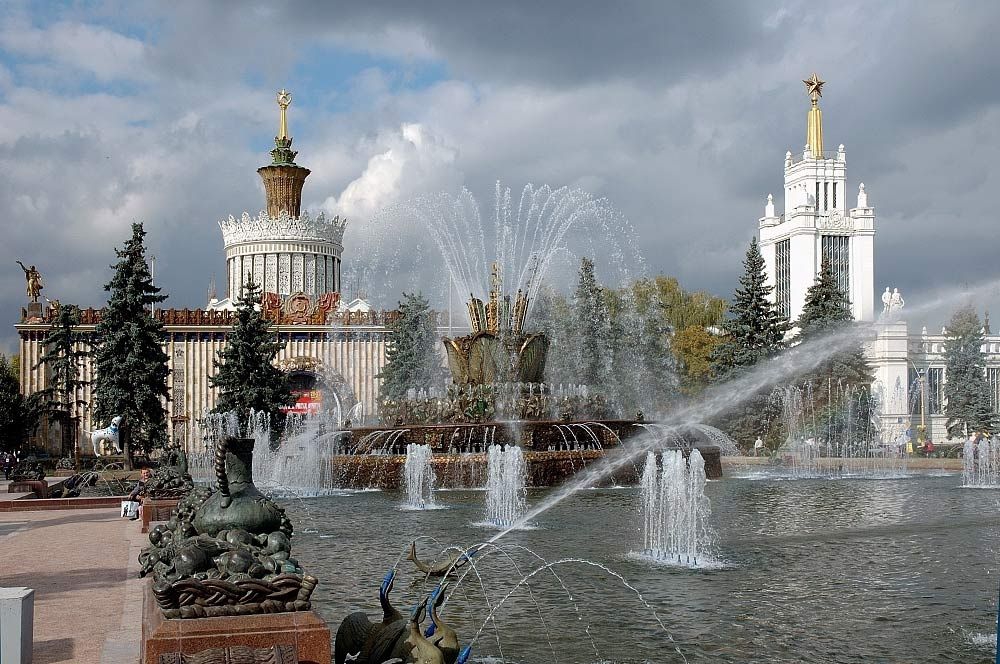 The city's oldest fountain is across the road from the Bolshoi Theatre, behind the Karl Marx statue at Teatralnaya Ploshchad. Dating back to 1835, this classical composition is called the Vitali fountain after its creator, the Russian-born sculptor of Italian descent Ivan Vitali. Allegorical figures around the base represent Poetry, Tragedy, Comedy and Music. The other fountain immediately in front of the theatre has a less illustrious history but the surrounding seating makes it more functional and it remains focal point and a popular meeting place, especially before shows at the Bolshoi.

Alexander Garden, beside the Kremlin, is an obligatory stop on any tourist's itinerary. Besides many other sights (including the high-kicking changing of the guard at the Tomb of the Unknown Soldier), there's a fantastical fountain composition by the prolific Zurab Tsereteli. Fairytale animals and characters stand in the waters alongside the Manezh mall's cafe strip – if you're familiar with the works of Krylov, you might recognise some of them. On neighbouring Manezh Square you can see the other half of Tsereteli's composition – including a fountain called “Geyser” and four sculptural horses representing the seasons. 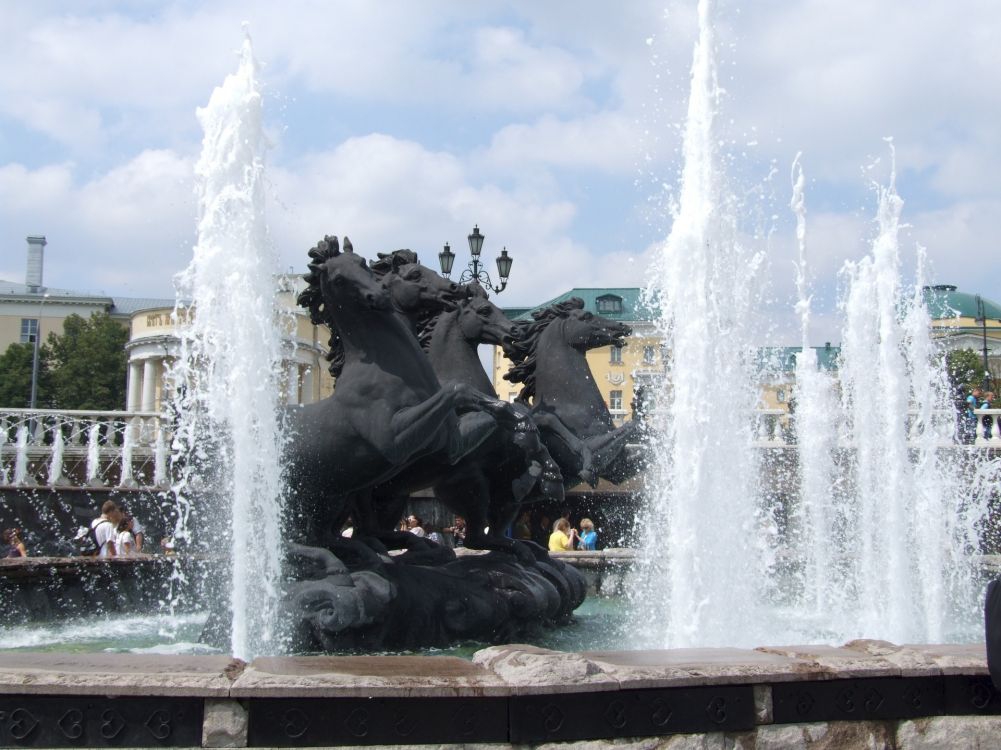 Moscow's most mind-blowing fountains would have to be at VDNKh. At this vast Soviet-era park and Stalinist pavilion complex, you can see a truly amazing gilded extravaganza featuring a central column of wheat, sunflowers and hemp surrounded by 16 golden girls representing the Soviet republics (even the short-lived Karelo-Finnish SSR). Behind it, the no-less spectacular Stone Flower fountain, inspired by Ural Mountains fairytales, shimmers with glittery mosaics and stones from the Urals, while sculptures of fruit and jugs represent plenitude.

In 1831, Alexander Pushkin wed the beautiful Natalya Goncharova in the Great Ascension Church at Ploshchad Nikitskikh Vorot, where Bolshaya Nikitskaya Ulitsa intersects with the Boulevard Ring. Right in front of the church you can see sculptures of the couple inside the “Natalya and Alexander” fountain-rotonda, unveiled in 1999 to commemorate the 200th anniversary of the great poet's birth. The water is claimed to be drinkable thanks to charcoal filtration, but we wouldn't risk it. By the way, Goncharova is said to have lived right nearby, where the Spanish Embassy is now located. 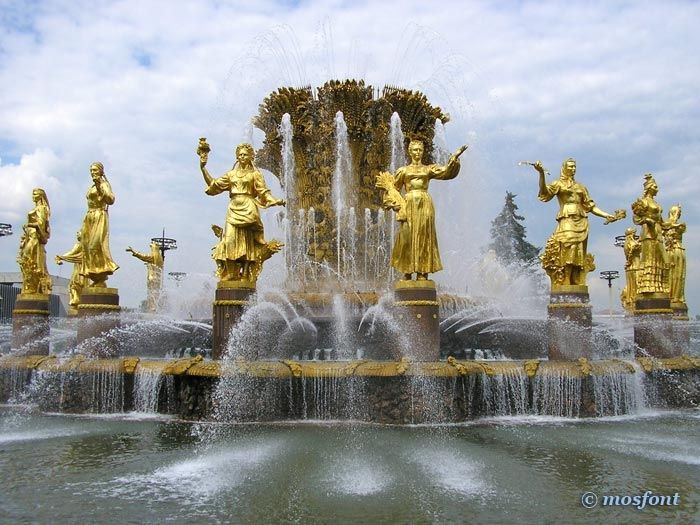 Gorky Park's central square is dominated by a vast but shallow fountain with unusually low sides. That might explain why it's most renowned for scenes of border guards and paratroopers exuberantly taking a traditional dip on their annual professional holidays, which fall on May 28 and August 2, respectively. Previously there was a different fountain at this site, graced by the iconic (but sadly destroyed) “Girl With Oar” statue; the present fountain dates to 1980 when it was opened to mark the Moscow Olympics. Watch out for light and music shows, when the the spouting water is colourfully illuminated and “dances” to classical music.

If you want to experience an even more elaborate light and music show, head out to the Tsaritsyno palace and park estate. The Middle Pond, where Catherine the Great once enjoyed watching fireworks over the water, now has a fountain equipped with a sophisticated squirting mechanism allowing it to out-dance any of Moscow's other fancy fountains. The 807 jets can shoot water 15 metres into the air in time with the music, while more than 3,000 underwater lights add to the stunning visual show. The water droplets are said to sparkle like diamonds, and overall the visual effect is meant to resemble an 18th-century crystal chandelier. 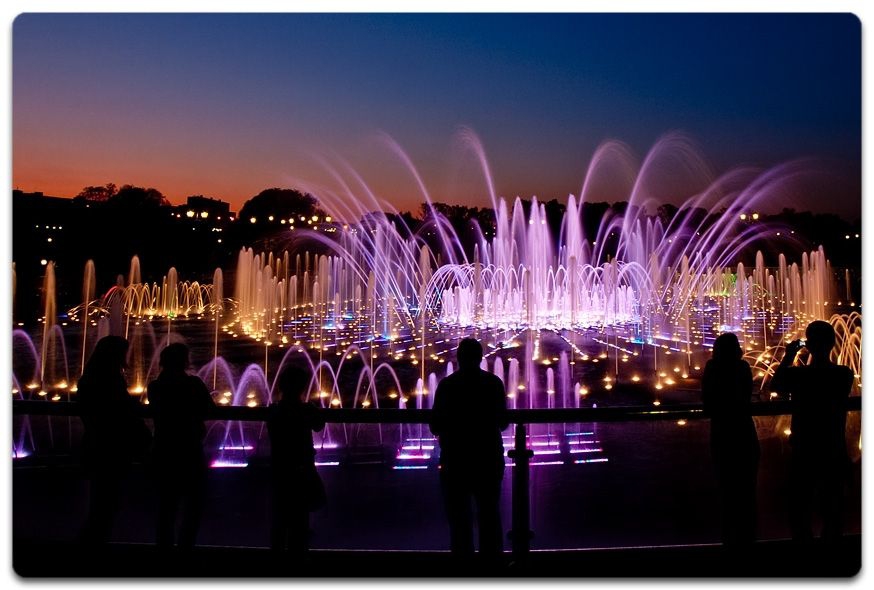