Moscow International Business Center, also known as Moscow-City, is a commercial district  in central Moscow located on the Presnenskaya Embankment. It consists of several grand towers built in a futuristic style. Each tower has its own distinctive design. Moscow-City is the largest real estate investment project in Moscow and in all of Russia. It is also home to the highest skyscraper in Europe. Construction is still in progress, but even though it is yet to be completed, the complex is already huge and impressive. The district embodies modern architecture and technology. In 2011, the "Moscow Tower" was listed among the top 10 most aesthetic skyscrapers in the world. The interior of its metro station is also interesting as it portrays a metro of the future.

Moscow-City is expected to become the first zone in Russia to combine business activity, living space and entertainment in one single development. There will be offices, restaurants, hotels, halls, stores, malls, galleries â in other words â a place for all kinds of business life. The transportation system is also an important part of this place. There is the beautiful pedestrian bridge over the Moscow River. A new and convenient transportation system "Moscow-City â Sheremetyevo International Airport" is expected to be completed soon. This high-speed passenger train will connect Moscow-City to Sheremetyevo and Vnukovo international airports.

The buildings can be seen from any point in the city and therefore have become an issue of debate, as some people think they destroy the historical look. However, as an international business centre, Moscow needs areas like this. Visitors to Moscow-City can see many great sights from this location. Two of the seven Stalin skyscrapers, the Radisson Royal Hotel and the main building of Moscow State University, are part of the areaâs panoramic view. This combination of historical and modern styles adds to the uniqueness of the area.

Each tower has its own name, which makes it easy to get around. All the towers are different. The Federation Tower is the highest one and is located in the centre of the whole ensemble. It is said to be built with concrete hard enough to even withstand the impact of an airplane. The North Tower is wonderful for its panoramic elevators and atriums. It also has its own fire station. This proved to be quite important, since there has already been a fire in the  uncompleted Federation Tower (fortunately nobody was hurt). The Central core was one of the most difficult to build and consists of two sections, an above-ground and an underground. It includes a metro station and there are plans to open two more metro stations connecting to different lines of the metro. Future plans include a high-speed passenger transport system that will connect the district with the airport (see above). Evolution Tower will become a popular place for brides and grooms due to the wedding palace to be located here. 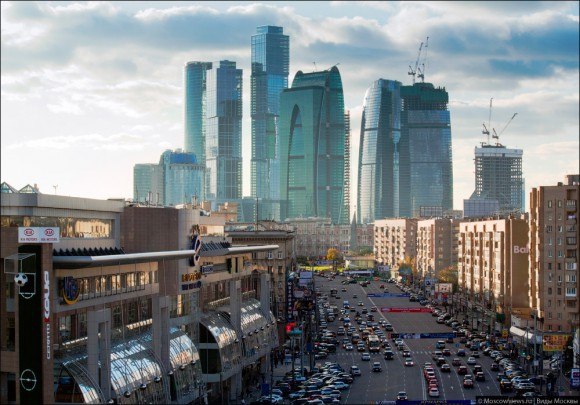 So even if you don`t have any business to do and are not looking for a job, you should come and see this magnificent architectural miracle. You will always be amazed at what you will discover.