Kuznetsky Most is one of the oldest Moscow streets in the centre of the city, not far from Lubyanka Square. The street gets its name from the bridge ("most" in Russian) over the Neglinnaya River which was used by Moscow blacksmiths ("kuznets") on the way to PushechnyDvor (Cannon Court). 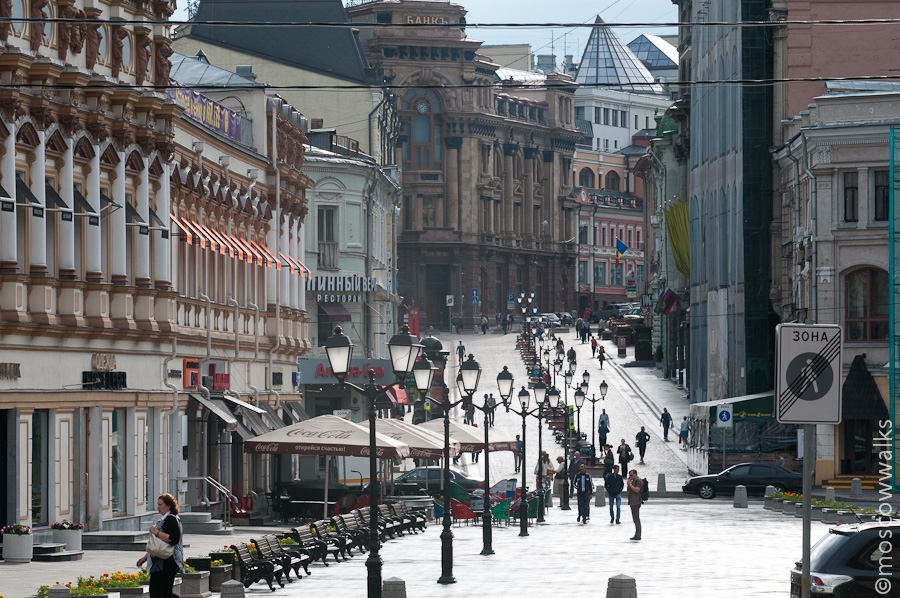 Since the 18th century, Kuznetsky Most has been an important shopping street, famous for its boutiques and book stores, photographic studios and restaurants. It has always been a cut above due to its hint of opulence and its fashionable ethos.

Italian, Britain and German stores were very popular in the past, but French fashion was what drove most shoppers into raptures. Fashionable Moscow ladies were often attracted simply by the names of the famous French tailors.

In post-war years the House of Fashion was one of the main locations of this stylish district. Today the "Podium Concept Store" stands in its place. The areaâs historical legacy has been preserved to this day though some old shops have given way to more modern ones. TSUM (the Central Universal Department Store) is one of the most renowned department stores in Moscow. A branch of TSUM, the Barvikha Luxury Village, can also be visited in Rublevka. The rebirth of Kuznetsky Most as the hub of fashion and opulent reoccurred at the time of the reconstruction of the grand building.

It is one of the fashionable city`s places, where you can find more than a thousand trendy brands of clothing, jewellery and perfumes, and it hosts a supermarket, restaurants of haute cuisine, a cigar room, cafes and the champagne bar Veuve Clicquot. New collections appear often promoted by show business stars in person. The famous fashion houses and designers such as Carolina Herrera, Roland Mouret and Victoria Beckham often take part in the TSUM events. Here you can enjoy exhibitions and special art projects launched by the TSUM Art Foundation which specializes in contemporary art. Different charity events are also organized there, for example helping children in need and cancer sufferers.

After the October Revolution of 1917 a lot of stores were closed and their rooms were taken over by various offices and organizations. From that time many publishing houses and book stores were opened up here. Nowadays, there are two large state libraries and a wonderful International Bookstore, the favoured haunting place for foreign language teachers and their students. It is located on the site of the old book store and its facade has remained as it was in previous times.

Art and culture is represented here by the Moscow Operetta Theatre, the School of Fine Arts and the gallery of the Moscow House of Artists: its magnificent building has always been used for exhibitions, besides this you will find there a permanent art gallery, a gift shop as well as a restaurant.

This old street abounds with splendid architecture and historical monuments as well as old houses of noble families. One of the buildings retaining the spirit of bygone days is the Tretyakov Apartment House, well worth seeing it is an object of cultural heritage being one of the finest examples of 19th century architecture.

Kuznetsky Most is a perfect location for romantic strolls, aristocratic rendezvous' as well as poetry readings and theatrical performances which take place in the park not far from the modern TSUM. The street had the honor of being the meeting place between the famous writer George Bernard Shaw and Soviet writers. Moreover, the street itself features prominently in many famous scenes of Russian literature.

Kuznetsky Most even nowadays hasnât lost its attraction of being a chic place to go to which can offer up a lot of interesting things to do. It is above all the street of cafe, stores and boutiques, ready to cater to your every whimâ¦