The Kolomenskoye estate is an amazing historical place. It has been a residence of Russian tsars, emperors. It is an archaeological site, which still has the remains of paganism dated 1 AD, so it would be a huge mistake to ignore and miss this gift of Russian beauty and uniqueness. 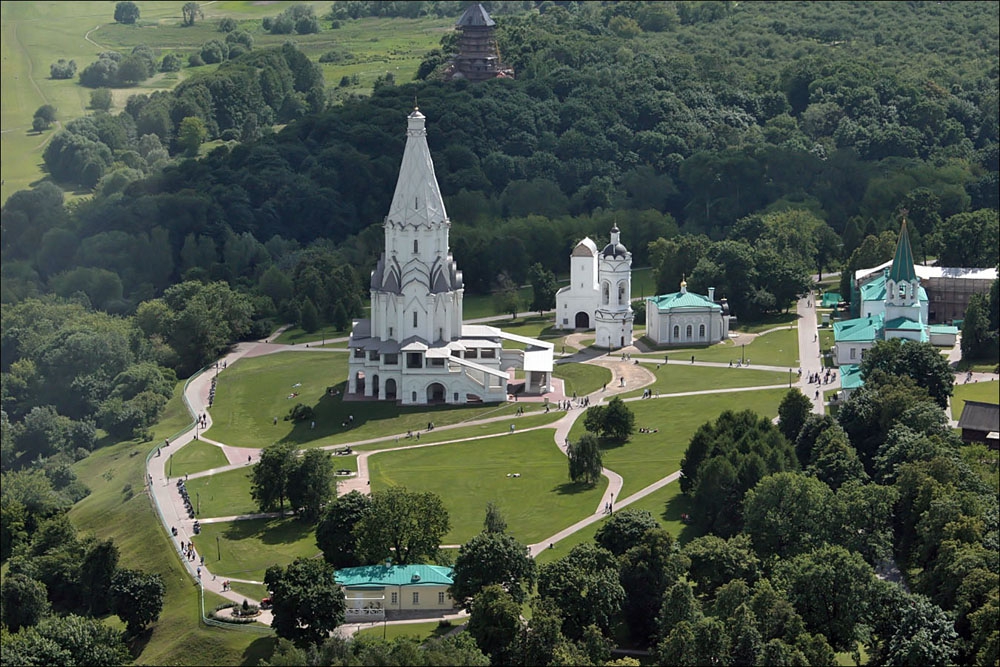 Kolomenskoye village was first mentioned in Ivan Kalitaâs testament in 1339. The oldest saved building is the Ascension church, built in 1532. Itâs a white stone tent-alike temple constructed in non-Byzantine tradition, built to commemorate the birth of an heir of the throne. The church looks like a young girl in a white dress with a snow like aspiring dome.

Formally Kolomenskoye has 17 architectural monuments. Some of them have always been there, while others changed their location as it happened to Peter's the Great wooden house which was brought to the estate from the Severnaya Dvina river where Emperor was watching his ship building works.

The Palace of Russian Tsar Alexey Mikhailovich has recently opened for tourists after long period of restoration in a new place, the original one was near the Church of Our Lady of Kazan. It is one of the brightest examples of Russian wooden architecture of the XVII century and a fascinating fairy tale 'told' by lots of deep-toned ornamental decorative elements and special applied materials. One should go to Kolomenskoye just to compare different lifestyles of Russian tsars and their families embodied in the design and interior of wonderful pieces of architecture.

There also are really long yet enjoyable walks along the paths of old gardens, they make a romantic impression and take you away to the past.

The whole park area is a place of wonders. Donât forget to touch magic stones of masculine and feminine power, which will make you feel healthy and happy in love. Also, donât forget to take a look at the old oak trees in the shades of which Peter the Great was playing as a kid, and cross over a mysterious Golosov gully, which is said to mislead some locals in the past by kidnapping them for more than 20 years. When peasants eventually returned to the village after being kidnapped for such a long time nobody could recognize them.

The Kolomenskoye estate lives full and interesting life. Recently, the house of bee-master, a watermill, forge and stables appeared to make guests feel authentic atmosphere of how everyday life went in the ancient times.

Kolomenskoye offers interesting guide tours with master classes and fantastic stories about how Russian tsars had fun and punished their slaves, horse carriage rides, local crafts shopping and many others.

It is just on the bank of the river, so in the summer time it becomes a riverside resort which invites visitors  for relaxing sunbathing on the sandy beach and family picnics.

All around the year lots of festivals, shows and cultural events including theatre performances take place in the estate on the Moscow river, still most of them take place when itâs warm outside.. New Year, Pancake week, Easter and other holidays are just few joyful celebrations.