The author is Maria Srambler

A quarter of a century is a very, very long time for a nightlife establishment not just in Moscow, but in the entire world. Few manage to stay afloat - or relevant - for several years, let alone two and a half decades. Yet that is exactly what the legendary night club Night Flight has managed to achieve in its exactly 25 years history!
'Quite simply the best place to be!' - these seven words are used as Night Flight's slogan. And it is no surprise. Having been around for 25 years now, the club is the oldest club and restaurant for Moscow's expat community, as well as sophisticated Muscovites who come here for fine food, beautiful company, second to none drinks and to party the night away well into the early morning hours. 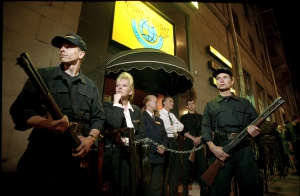 Night Flight’s story begins in 1991, a turbulent year in Russia’s history. On October 25th of that year, two Swedish businessmen Sonny Lundkvist and Hokan Polhammar and their Russian partner Yury Giverts, opened a totally new club for Moscow, just 300 meters from the Red Square. The club’s opening coincided with monumental shifts within the the country.
As Yury Grivets remembers it:
“In that period of time when we decided to open the nightclub, our country - and Moscow in particular - had nothing. We understood that we’d have to bring in everything from Sweden and I’m not just talking about the furniture. We brought in the wallpaper, ashtrays, toothpicks, bolts and screwdrivers. Our order consisted of thousands of different items. On August 15 of that year the order was delivered and then on August 19, outside our window we saw tanks rolling down Tverskaya Street followed by the Putsch on August 22. To our own surprise, in absolutely record time, we managed to open the nightclub on October 25. I still remember the line till this day - it stretched all the way to Yury Dolgoruky’s statue!” 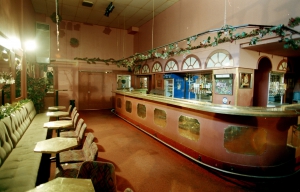 Those years are also remembered by the empty shelves in supermarkets and incredible naivety: Night Flight’s managers had to buy lemons for the bar at Stockman [the first western department store in Moscow] with dollars. There was no fixed exchange rate for the ruble and any foreign currency was accepted at the bar.
By 1993 the situation became slightly - just slightly - more stable and Night Flight added a restaurant to its repertoire. All the products - and chefs - were brought in from Sweden and the restaurant was one of the first to introduce the business lunch concept to the Russian public. Until this day the restaurant’s menu is constantly changing and evolving according to the latest gastronomic trends, while at the same time staying true to traditional and beloved Scandinavian dishes.
Towards the end of the 1990’s Night Flight had become so famous, that one of the scenes of Sidney Sheldon’s 2001 crime novel “Falling Skies” took place in the legendary Moscow nightclub...without ever having personally been to the club!

Throughout its 25 year history, Night Flight has witnessed more history than most of us. The secret behind its phenomenal success, according to its founders, is their dedication to quality.
Until this day, Night Flight has it all  for spending a  night of pleasure –  gourmet  food (the grilled meats and fish are considered among the best in Moscow)  prepared by acclaimed Swedish chefs, classic and contemporary cocktails and a sommelier-selected wine list in a cosmopolitan setting.  Downstairs the club has three  separate bars: the main bar, an upstairs VIP lounge and a small disco bar with a live DJ providing the setting for the after dinner fun.
Night Flight promises and delivers a sumptuous and entertaining evening of tempting the sense s– so start in the restaurant, overlooking the bright lights and unceasing buzz of Tverskaya street.  As the sun sets, the views inside the club come to life with the arrival of a stunning array of local beauties all dressed to thrill and eager to engage you in Russian or English.  Move down to one of the bars and the viewing  gets yet more intense and carries on so until the early hours.
Many a visitor to the Club has said: “There is nothing like Night Flight back home!”  And they are right!  After all, 25 successful years is enough evidence of that. 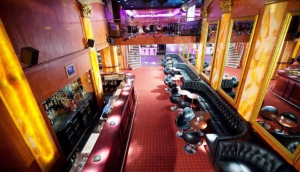