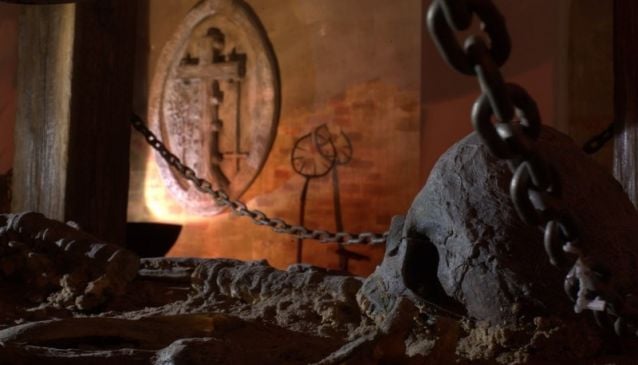 Museums gained long ago a rightful place in the space of sophisticated beauty, overwhelming inspiration, and spreading light. But sometimes there are exceptions to the rule. Torture Museum in Moscow is an exceptionally unique museum with collection of old torture instruments, stunning reconstructions of non-extant torture machines, and horrific engravings on the theme of torture and executions. Similar museums in other countries are considered mainly as 'museums of horrors', revealing the theme of witches, werewolves, and vampires. Moscow Torture Museum tells about methods, being legal once, of physical effect on humans, classifying them and analyzing what was behind them.
More than 10 years ago Valeriy Pereverzev, founder and director of the museum, started his collection from wristbands, then boots, lashes, tongs. Today the collection includes over 200 artifacts, and it is constantly completed with new ones hunted up and brought by Valeriy from around the world.  A real expert that truly enthused about what he does, sometimes Valeriy himself conducts excursions and takes a journey into the history of the European Inquisition and Tsarist Russia. 'People always wanted performance; they were visiting squares with hangmen like museums. Moreover, tortures and executions were the first public service advertisements - don't thieve otherwise you'll have to wear the false coiner's mask' - tells Valeriy. This year the project under the title 'Russian Tao' has been launched, presenting terrifying banned objects created by Russian intellectuals: 'Torturing iron' by artist Damir Muratov, 'Prison hooch still' by writer Stas Simonov, 'Tattoo machine'  by Valeriy Pereverzev, etc. Recently the Bluebeard's Kunstkamera has opened in Torture Museum. Vanka Kain's cut nose, Princess Lopukhina's extracted tongue, Rasputin's phallus, Van Gogh's ear, two-headed rats, mirrors of Kozyrev and dolls, forbidden at dolls salons, are only a few of the exhibits, which reflect vulgarity, kitsch, pop and materialize the symptoms of 'New Plague'.
The Museum's life is intimately connected with films directed by Valeriy. So, the film named 'Panoptikon' has been awarded at the V International Movie Festival 'Kaplya' as the best horror film. What are we capable of when driven by fear? What price are we ready to pay for our safety? And where is, after all, the borderline between personal safety and prison we force ourselves into day by day? All these questions are raised in Panoptikon.
The most important thing any visitor should conceive is that Torture Museum wasn't designed to scare and horrify, but to make think. 'Corporal punishments are one of the thermometers that show cultural and ethical degree of society' - states Valeriy. 'These artifacts should be kept in museums and never come back to our life. Let it remain history'.