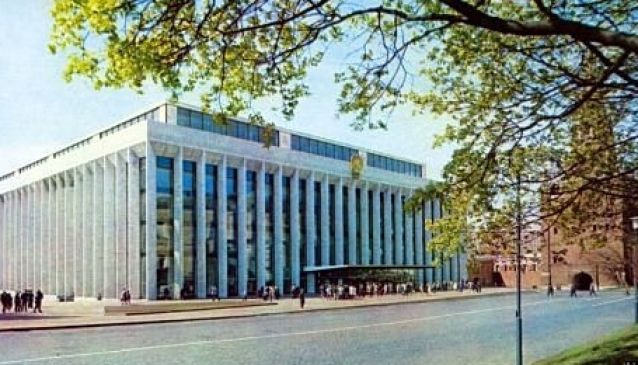 Directions to The State Kremlin Palace

http://kremlinpalace.org/
The State Kremlin Palace could be named the main stage of the country, the most prestigious theatrically-concert venue of Russia. The Kremlin Palace is in the heart of Moscow, it is located in territory of a medieval fortress and residence of the head of the state.
In 2011 the State Kremlin Palace celebrated its 50th anniversary. Nevertheless it is the youngest building in the Moscow Kremlin. Anyway, at first important political congresses were held there, the first President of Russia has taken the oath.
This unforgettable monumental building was constructed as one of the main symbols of the Soviet epoch. Each its hall looks as a work of art. The top part of a building is occupied with a large Banquet Hall. The State Kremlin Palace can accommodate about 6000 persons. Convenient armchairs, the first class acoustics and the advanced equipment allow visitors enjoy every minute of performance of the favorite artist. The sound and light equipment of the venue have been completely updated. Scene of the State Kremlin Palace is one of the largest in Eurasia. About thousand actors can act on it at the same time.
There are different events on a stage of the State Kremlin Palace. Among them variety concerts, fashion shows, cinema premieres, ballets, operas, forums, circus representations etc. The most famous Russian and World stars perform here: Whitney Houston, Luciano Pavarotti, Joe Cocker, Mireille Mathieu, Tony Braxton, Lara Fabian, Cesaria Evora, Bryan Adams, James Brown, Liza Minnelli, Maraya Carey, Patricia Kaas, Placido Domingo, Rod Stewart, Julio Iglesias, Charles Aznavour, Elton John, Eric Clapton and many other legendary artists. The best opera theatres of the world, among them the Opera of Rome, the Bolshoi Theatre, the Mariinsky Theater toured here.