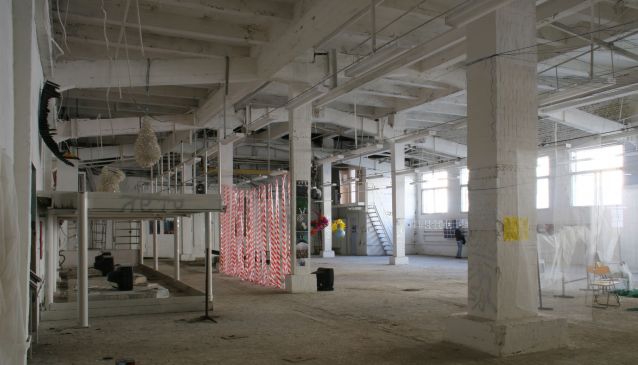 Directions to THE CENTER FOR CREATIVE INDUSTRIES FABRIKA

Founded in 2005, as PROEKT_FABRIKA, Center for Creative industries FABRIKA now is the first independent not-for-profit contemporary visual art organisation in Moscow. The project has more than 700 square meters of exhibition spaces, international residency,and 1000 square metres of venue space destined to accommodate diverse cultural and social events such as dance, theatre and music concerts. Originally designed to present a program of collective exhibitions, the project is now committed to promoting cultural and intellectual diversity through the presentation of international contemporary art and culture. In 2008 our centre became a member of Trans Europe Halls ( European network of independent culture centers).

CCI FABRIKA's focus is: visual arts, contemporary theatre and dance, media.
CCI FABRIKA's mission is: challenging familiar ideas and concepts in order to formally defamiliarise them so that they can be seen as a new. The programs are devoted towards inspiring thought and creativity whilst simultaneously stimulating public curiosity about contemporary art, thereby contributing towards developing the cultural identity of 21st Century Moscow.

The project originally came about as the result of some simple and obvious ideas which were subsequently combined with the enthusiasm of key people from the spheres of business and art who realised the following: There is the need for non-profit independent exhibition space in Moscow, however, at the time no such space existed. The answer appears to lie in the fact that there is a space at the paper factory, which is not used for production any more and hence might be converted for the specific purpose of exhibiting contemporary art work. The management of the factory is interested in facilitating and championing the continuation of this conversion project. The trend of industrial conversion is commonly accepted and well known, and so it is as appropriate for this work to take place in Moscow, which follows the same trends as most megalopolises, as in any other major city. Projects such as this are not uncommon in many well known cities such as London, Berlin, New York etc. As contemporary art comes more and more into demand in Russia, so the public interest in it is growing rapidly. Modern Russians, especially young aspirational people, need not only cinemas and restaurants, but something new, unusual and provocative; thus, in October 2004, the first industrial shop floor was renovated into an exhibition hall, and in January 2005 PROEKT_FABRIKA started up.

Since that time the projects listed below were realised as we began to explore and make manifest our initial objectives. Apart from the exhibition activity already mentioned, we are keen to develop joint projects in drama and documentary and also to diversify and develop our collaboration with those other contemporary art galleries in Moscow who would mutually benefit from such a co-operative and supportive working relationship. e.g. The Moscow House of Photography, with whom we have already begun to develop close links. CCI FABRIKA intends to present some international not-for-profit exhibition projects so as to strengthen the unifying and mutually beneficial advantages of collaborating in such a bringing together of cultures by which process we shall hope to affect and engage with contemporary art and culture both at home and abroad.

CORPORATE IDENTITY
CCI FACTORY
The design studio 'Letterhead', which engaged in branding, visual communication, and graphic design and fonts, created the corporate style of the Center of Creative Industries Fabrika studio.
The creator of the bureau is designer, illustrator, typographer and engraver Yuri Gordona, known as the most in-demand designer in Russia. They have created or been given orders for more than than 300 font style for different customers, including McDonald's, Procter & Gamble, and magazines Rolling Stone, Esquire, 'Spark' and many others.

Designers Olga Vasilkova and Valeri Golijenkov worked over the development of the concept of CCI Fabrika studio. The new style of Fabrika was also born and made into the flesh due to the object 'Gudok' by artist Haim Sokol.
Thus the corporate 'factory gudok' came into being in the form of the CCI logo, but more than that it exists in the factory space.