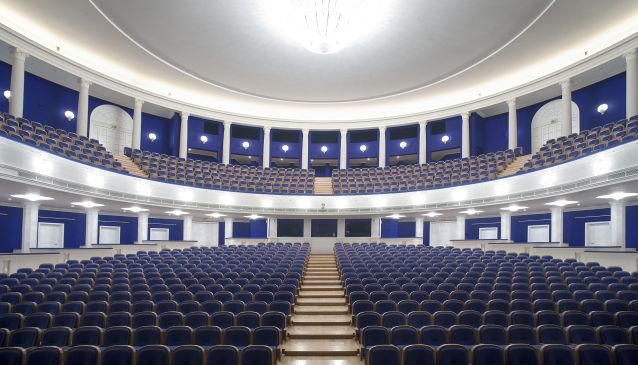 Directions to Stanislavsky and Nemirovich-Danchenko Theatre

Stanislavsky and Nemirovich-Danchenko Moscow Academic Music Theatre is located in the city center. The history of the theatre started in 1941, when the Stanislavski Opera Theatre and Vladimir Nemirovich-Danchenko's musical theatres were merged. Both Stanislavsky and Nemirovich-Danchenko couldn't accept opera to be just a 'concert in costumes'. They were striving to make opera vivid and meaningful as dramatic performances were. The theatre is known to have a very unique style. Alongside with classical opera and ballet by Prokofiev, Puccini, Tchaikovsky, Verdi and other classical composers could be heard and seen in the theatre, the audience can enjoy experimental performances such as the ballets by Nacho Duato, Jiří Kylián, and Jorma Elo. The world premiere of Hamlet by Vladimir Kobekin first was carried out exactly in this theatre. French avant-gardists Erik Satie and Darius Milhaud staged several operas in the theatre. It is worth mentioning that Swan Lake, which has been universally acknowledged as a world-class choreographic masterpiece and part of Russian classical heritage was performed exactly in this theatre.
Nowadays the theatre is based in its own building with one opera and two chamber music halls on Bolshaya Dmitrovkaya Street. The building of the theatre was constructed in XVIII Century and belonged to Count Saltykov. From 1839 to 1909, the Count leased the building to Moscow Merchant Society. The club regularly organized concerts, and in 1843 Franz Liszt had a concert in the building.
In 2002 the building was closed for reconstruction. At the beginning of 2006 the small stage was reopened by the first night of 'Moscow. Cheryomushki' by Shostakovich.