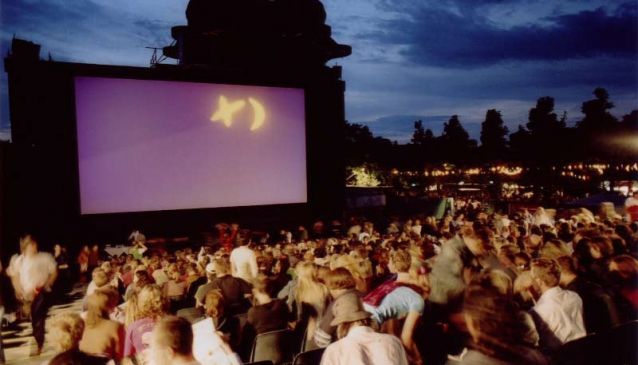 Artplay - Artplay open air cinema is set up on the roof of the Centre of Design. Hammocks, chaise longues, cushions and benches for the viewers to sit. Films are divided onto 'programmed weeks'. Each week a curator is invited to make up a repertoire.

Gorky Park - the summer version of the cinema-theater 'Pioner' in Gorky Park, it is the first and biggest open air cinema in Russia with 350 seats. A wooden amphitheatre with a 'green wall'. The repertoire's mostly festival cinema and films, which are not in high official distribution.

Krasnaya Presnya Park - located near the White House. A roofed summer stage serves as a screen at nights. The viewers can sit around on the benches. Poufs and blankets provided in case of a colder night, but no films when the weather gets too bad. Nice old Hollywood classics and best European cinema. No charge.

Muzeon Park - the only summer cinema with a real roof. Films are screened every day with night non-stops at weekends: international festival films, independent cinema, European and Asian cartoons for kids and adults. All films are shown in their original language with Russian subtitles. Ticket: 350 Rubles. No films in rainy weather. 350 seats.

Bauman Garden - most charming backdrop for an outdoor cinema. Around 300 benches altogether to sit. Instead of popcorn, you can get food & drinks from the neighboring John Donne pub. Program: national and foreign cinema classics, Soviet-era and international festival movies. Free of charge.

Sokolniki Park - a pop-up outdoor theatre with 4x6 m inflatable screen, which allows turning any place in the park into an open air cinema. 50-100 poufs as seats. Program: majorly box-office hits. No films in rainy weather. The park plans to have its own outdoor theatre with 380 seats capacity.

Fili Park - the open-air cinema is to be set up in the main parkway. Films to showcase two times per day - at 12:00 pm and 8 pm. The prices are lower than in the other outdoor cinemas. Program: films for kids, science and season premieres.

Hermitage Garden - Inflatable screen to watch, hammocks, poufs and chaise-longues to sit. You can also bring your own mats to sit on the lawn. Films are broadcast through earphones in four different languages. Free of charge, but a deposit to be paid for earphones, hammocks and poufs. Films are shown after 21:45.

Strelka - One of the first outdoor cinemas in Moscow. Big wooden steps to sit. There's a canopy above, although in case of rain, the viewers will be supplied with raingears and blankets. Films are three times a week, always at 22:30.

Vinzavod - located in the Green Hangar of Vinzavod Centre of Modern Art. Roofed space, one wall is missing which enables to consider the theatre 'outdoor'. 200 tip-up seats, the two front rows are regarded as VIP-area, which is really cane chaise-longues. In case of cold weather the viewers get cushions and blankets. Films in their original language with Russian subtitles.

Flakon Design Factory - it is called 'Silent Cinema' as you watch it in wireless headsets (1000 Rub deposit). Set up in the inner courtyard of Flakon design factory, next to Café Brocard summer terrace. Viewers can use chairs or cushions. Program: mostly experimental non-commercial cinema - whimsical kind of movies, documentaries, cartoons, videos and audio-visual performances.

Pop-up Cinema 'Kinoparking' - every time it is a new place for 'Kinoparking' cinema. Often sets up on the parking lots of trade centres. Where it'll be next time, the films to watch and at what cost can be found out on their web-site. Since you watch films from the cars, you pay per car, not per person. You can watch 3 films per night. Famous Hollywood hits: comedies, thrillers and horror-movies. The cinema is accompanied with a mobile café - popcorn, coffee/tea, soda and sandwiches.