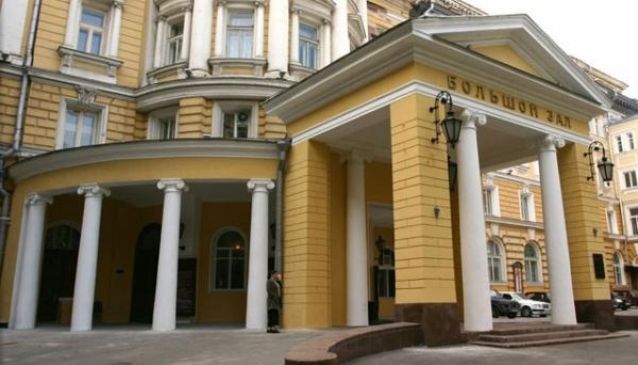 Moscow P. I. Tchaikovsky Conservatory is one of the most well-known world musical institutions. It will be 150 years soon. The history of Conservatory connects with the name of the first professor - great Russian composer P. I. Tchaikovsky whose monument was set up in front of the Great Hall by famous sculptor Vera Mukhina.
Now it is not just one of the best musical academy but the most popular concert hall in Moscow. There are three main halls - The Great Hall, The Small Hall, and Rakhmaninov Hall. All of them are centrally located in one area not so far from the Kremlin on a very beautiful old street - Bolshaya Nikitskaya. Of course, the main venue is the Great Hall.
The Great Hall of Moscow Conservatory is one of the famous concert places in the world. First of all, its high-quality acoustics, wonderful decoration and comfortable location are the features that characterize its uniqueness. The Hall is famous for its Cavaille-Coll organ (1899) which was regarded as one of the best in the world during the Paris exhibition of 1900. The Hall was opened in April 1901. Now, best soloists, orchestras and ensembles perform here. International festivals and competitions take place in the Great Hall, and among them is the famous Tchaikovsky Competition. The Great Hall can accommodate 1737 visitors.
The Small Hall was opened in 1898. It is famous for its perfect acoustic quality. The Small Hall is very cosy and has an organ too. Most of concerts in it are chamber music and pianoforte solo. There are 436 seats.
Rakhmaninov Hall is the oldest and the newest hall of Moscow Conservatory at the same time. This venue was built in the beginning of the 19th century. Then there was the Synodal Singing School with a very good choral hall. In 1983 a very beautiful light blue hall was open again with the concert of brilliant Soviet pianist S. Richter. Chamber and chorus concerts are held there. In addition, old and contemporary music sound in that place. Almost all of the concerts are free. Rakhmaninov Hall can accommodate 252 people.
Tickets for most concerts could be purchased online on http://bigbilet.ru/ . Also, you may buy contract season tickets including interesting programs