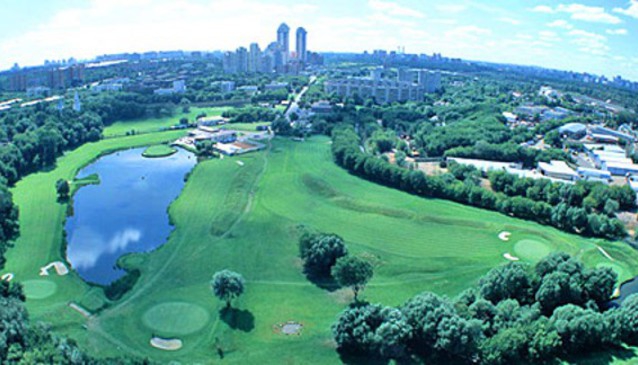 It is centrally located, just off Kutuzovsky Prospect, within 5 minutes drive from the Victory Park and the Triumphal Arch. Right in the center, yet green and picturesque with lakes and 15 Century Church next to it. Moscow City Golf Club was the first one to open in Russia on September 15, 1987 at the urban wasteland on the street Dovzhenko held long-awaited 'ground breaking' - famous sportsmen Pele, Mike Tyson, Sven Tumba and Alexander Ragulin made symbolic throws with the golf clubs. This day is considered to be the day of foundation of Moscow City Golf Club. The founder of the club is Sven (Tumba) Johansson ex World Champion hockey player. Thousands of golf fans gather here every season.

June 26, 2004 the Club House was open again after restoration. The opening ceremony was attended by the founder of the Moscow City Golf Club Sven Tumba Johansson and officials, senior officials from the Moscow Government.

As a result, the restoration Club House was transformed into a wonderful place for relaxition and organizing events. It has spacious and luxuriously furnished rooms available for the members of the Moscow City Golf Club: restaurant, golf bar, library, cigar and billiard room, conference room, office «Old Tom», Beauty Salon & SPA, gym, showers, saunas and relaxation rooms with personal lockers. Interior of the Club House was completed in classic English style by the famous designer from Hong Kong Garvin Chen (architect Garvin Chen).

Moscow City Golf Club is a wonderfull place with impecable service, the members can gain privileges in foregn golf clubs including in the International Association of the Clubs.