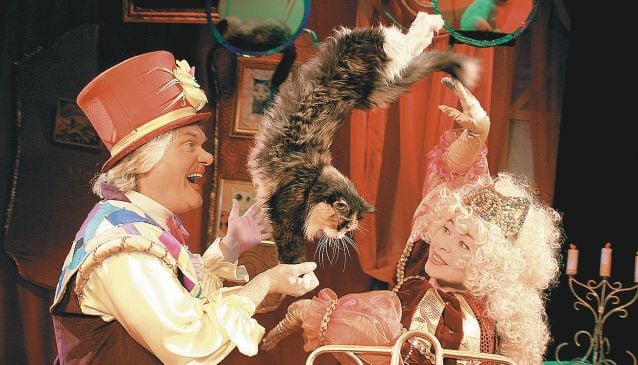 Yuri Kuklachev's Cat Theatre, which was established in 1990, settled in the former 'Prizyv' cinema building, located on Kutuzovsky Prospekt (avenue). Yuri Kuklachev and his like-minded friends - designers, painters and photographers - transformed the building into a cozy and unique world. This world doesn't know anything about wars and quarrels, here cats live peacefully with dogs, and grown-ups discover a child in their souls. Children who visit the theatre will want to come again to get inside this fairy tale atmosphere.

The theatre hosts two independent artistic teams, headed by Yuri Kuklachev and his son Dmitry Kuklachev. Performances of father and son follow each other, thus, despite active touring, theatre doors are almost always open to its audience. When Yuri Dmitrievich is on tour with his shows, Dmitry Yurievich stays in the theatre and keeps making spectators happy.

The theatre tours the whole world - its shows are enormously popular in the United States of America, Canada, Finland, China and Japan, where Yuri Kuklachev has brought his cats many times. The theatre is awarded many international prizes, among which there is a golden cup and the title of 'most original theatre in the world', which the theatre got during its tour in Paris.

Years of performing resulted in a tight creative relationship with a famous film director G. A. Ungvald-Khilkevich, who is also employed as general director of the theatre. Creative talent of Mr. Ungvald-Khilkevich helped to prepare eight unique performances: 'Catnappers', 'Prince Nutcracker and the Rat King', 'Cat Clowns and Love', 'The Cat in the Boots', 'Cats from the Universe', 'My favourite cats', 'The Swan Lake' and 'School of Kindness'.

Each theatre performance welcomes children from children's homes; special almost-free tickets make shows open for physically challenged persons and war veterans. The theatre often gives charity performances in children's homes and homes for disabled persons, sanatoria for children with weak health and child hospitals. The year 2001 brings the head of the theatre Yuri Kuklachev the order of 'Nation's Hope' and the title of the 'Academician of natural sciences'.

2005 is another important year for the theatre - 'Kuklachev's Cat Theatre' obtains the status of the State Cultural Institution of Moscow city.