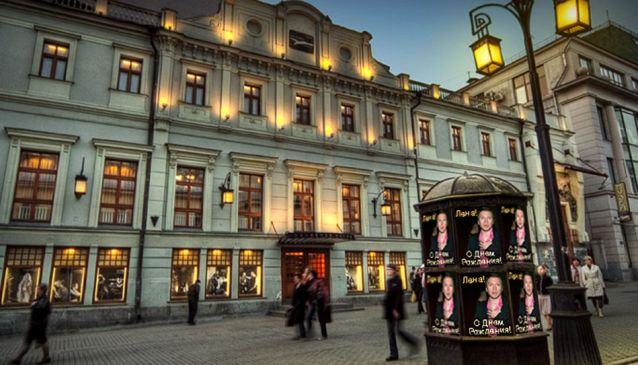 The Moscow Art Theatre  (MHT, pronounced as Em-Kha-Te) was founded in 1898 by Constantine Stanislavski (famous Russian actor and theatre director) and Vladimir Nemirovich-Danchenko (Russian theatre director, writer, pedagogue, playwright, producer and theatre organizer). 'Tsar Fyodor Ioannovich' by Alexey Tolstoy was the first play performed in the theatre in the 14th of October 1898. However the real fame of the theatre is connected with Anton Chekhov's works such as 'The Seagull' (1898), 'Uncle Vanya' (1899), 'Three Sisters' (1901), 'The Cherry Orchard' (1904) and the works of Maxim Gorki:'The Petty Bourgeois' and'The Lower Depts.' (1902). These performances created new type of acting and directing which spread all over the world.
A lot of world-known classics, such as William Shakespeare ('The Merchant of Venice'), Gerhart Hauptmann ('The Sunken Bell'), Sophocles ('Antigone'), Henrik Ibsen ('HeddaGabler'), Fyodor Dostoyevsky ('The Village of Stepanchikovo'), and many more were performed in MHT.
Since 1902 the theatre is located in Kamergersky Lane in the building of former Lianovsky theatre which was reconstructed the same year. Currently the art director of MHT is Oleg Tabakov (famous Soviet and Russian actor).