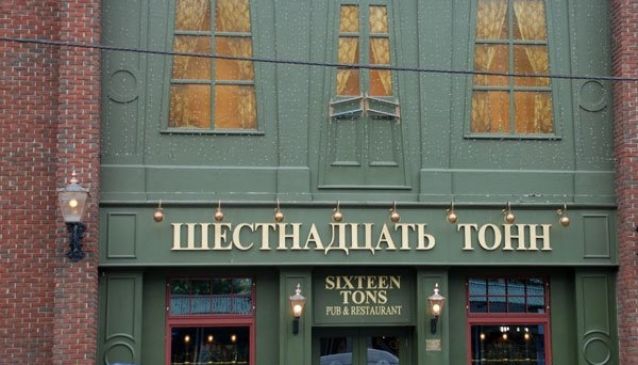 http://www.16tons.ru/
16 Tons is centrally located, just a minute-away from the subway station 'Street of 1905 year'. It was open in April 1996 as a traditional English pub. Now 16 Tons is a perfect combination of a modern club, nice restaurant and original pub in Moscow with unforgettable interior design created by popular British company. It can accommodate up to 600 people.
Firstly, 16 Tons is a nightclub with a stage and a dance floor. It is the first concert hall in Moscow where you can listen to guitar bands, take part in parties with the latest music and discover new British and Russian bands. Besides, you may visit 'new record presentations or performances of top-stars, and other single bright events'.
Secondly, 16 Tons is one of the oldest English pub in Moscow with cozy atmosphere and its own brewery. 16 Tons branded excellent beer is awarded with lots of international prizes.
Thirdly, 16 Tons is a high-quality restaurant. The venue offers a various menu and plays music at a level that doesn't interfere with a cozy chat or a business meeting. The club's launch is very popular there and also, it offers 3 kinds of licensed house beer: 'Special lager', 'Particular red' and 'Double stout'.
The club 16 Tons is named after a song that was composed by Merle Travis and dedicated to the hard labour of miners. The song 'Sixteen Tons' written in America in 1946 can be heard at the club - last call before each concert.