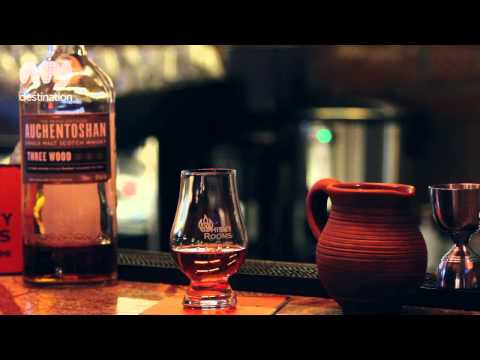 Fancy a wee dram of Scotland's finest? Or perhaps you prefer Irish distilleries' wares? Whatever your taste, your thirst will be quenched by a visit to Whisky Rooms. This central Moscow whisky bar and restaurant has an exceptionally large selection, with more than 160 varieties of whisky and whiskey on offer - not just from these two prominent producers but also from other countries including the United States, Canada and Japan.
Scotland is especially well represented on the menu and connoisseurs will be delighted to discover that the offerings are listed by place of origin: Lowlands, Highlands, Campbelltown, Speyside and Isles. There's something for every taste and budget, with 50ml ranging from 200 rubles (various McClelland's) to 5,500 rubles (The Macallan 30-year-old Sherry oak or Fine oak) or 6,100 rubles (Highland Park 40 YO) - and plenty of options in between. Ever tried Welsh whisky? The Whisky Rooms is a rare place in Russia where you can try Penderyn Icons of Wales Red Flag (580 rubles).
Besides a full range of other tipples - from cocktails to beer and 'elite' tea - Whisky Rooms also offers an a la carte menu of gourmet cuisine. Many dishes include whisky as an ingredient, such as filet of beef served with a sauce of McClelland's Highland whisky and mixed salad; marinated Scottish salmon doused in Highland Park 12-year-old whisky; rabbit braised in McClelland's Islay whisky with shallots, smoked on pine sawdust in front of you right before serving; and even two different kinds of whisky cheesecake are featured on the menu to tempt your tastebuds.
Regular promotions by renowned distilleries expand guests' horizons with whisky-tasting sets along with specially chosen seasonal dishes.
Positioning itself as a private club for whisky lovers and a 'secret place for friends', Whisky Rooms is somewhat hidden away in a 19th-century house in one of Moscow's most attractive, historical neighbourhoods. Visitors need to make reservations by phone or e-mail and can only join the club on a member's recommendation or by application via a popular online social network. But once you're in, you'll find a world of refined pleasures at your fingertips. There's a billiards room, a home cinema, a library with chess tables and whisky books, and rooms styled as an old English club and a Scottish distillery. The house's interior is well preserved, with arching ceilings and brick walls - even a fireplace so you'll feel cosy as can be while sipping on your chosen whisky.