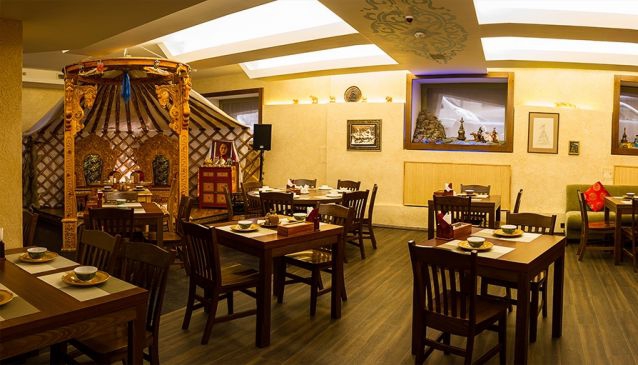 For a truly exotic gastronomic experience, pay a visit to Selenge. This central Moscow restaurant offers something quite hard to find on the dining scene - Buryat-Mongolian cuisine.

So just what kind of food is typical of the Central Asian country of Mongolia and its northern neighbour, the Russian republic of Buryatia located beside Lake Baikal in Siberia?
Given the severe climate, the largely steppe landscape, and the historically nomadic herding lifestyle of the people, the traditional cuisine is big on meat and milk products, with not so much in the vegetable department. Selenge caters for local diners' preferences by including some vegetable dishes and not-so-traditional salads (Greek, Caesar), but there's still an abundant selection of genuine Buryat-Mongolian fare to provide novices with a good introduction to the cuisine and satisfy aficionados' cravings for their favourite Buryat-Mongolian foods.
The star of the show is buuzy, also known as pozy. These steamed, meat-filled dumplings are quite similar to Chinese baozi or Central Asian manty. Shaped like a ger - the nomads' traditional portable dwelling - they should be eaten by hand, making sure to sup down all the hot soupy juice inside. Selenge's menu offers different kinds of buuzy filled with various kinds of meat. If you can't choose, try the buuzy assortment, including Buryatian, Mongolian, Tuvan and Kalmykian varieties - a dish that surely delivers on the restaurant's slogan, 'The very best of the traditional cuisine of all Mongolian people'.

Besides many other unusual dishes with hard-to-pronounce names like tsuyvan (noodles with meat and vegetables), khuushuur (fried meat-filled dumplings) and hugabsha (liver in a 'shirt'), you can also try the delicious omul fish from Lake Baikal. Finish up with Buryatian green tea with milk, or Tibetan tea with milk, butter and salt.

With a visit to Selenge, your immersion in Buryat-Mongolian culture is further enhanced by the bright interior with its colourful decorations. The restaurant also presents live ethnic music by performers in national costume, plus cinema evenings, Buddhist prayer ceremonies, Tibetan healers' visits and much more.