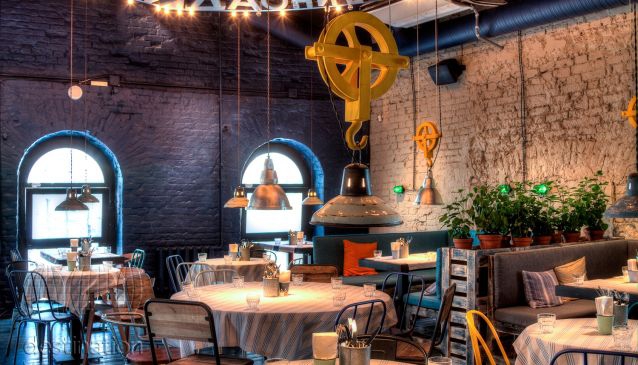 Syoma, die trying your borsch - you must get well!
(Odessan saying)

Weekdays in a city can be such a headache that a delish prune cake would be just cool to have. Forget about diets and calories, and all revolutionary culinary breakthroughs. Get comfy, ease up and enjoy Odessa-Mama Cafe's cooking - just like your Mom would cook - yummy and hearty as they love it in Odessa.

- What exactly is the Odessa cuisine?
- That's when it's tasty.

Oh, this Odessans' habit to have a hearty meal! How can they forget strong savours coming from fish market stands of the famous Privoz market, nice fresh country-style brynza and fabulously appetizing aubergine paste... Duc de Richelieu, the founder of Odessa, built this city of equal opportunities for people of different confessions and nationalities - Russians, Ukrainians, Jews, Armenians, Greeks, and Romanians. An astounding fusion of Odessans' gastronomic preferences is based on the brightest culinary traditions of these nations and those brought by immigrants from farther corners of the planet.

'Odessa-Mama' is a regular Moscow café offering abnormally delicious Odessa dishes. The café's owner Tatiana Melnikova was initially skeptic about the idea of opening such an Odessa-style place in Moscow. Until she happened to come and see Odessa. 'I came to Privoz where sellers were really like life characters from Odessan jokes, - said Tatiana. - Their eloquent chattering hypnotized me so that in five minutes I was standing there with two bags of sausage and salo (pork fat), a cup of Chernigov beer in hand and a herring in the mouth, and having no idea what on earth I had been doing there. Something clicked in me, and I suddenly realized that Odessa is not only the city of Ilf-n-Petrov or Zhvanetsky and so distinctive Odessan humor but also a big seaport, a place with the wide range of foods, a city where people love eating, drinking and enjoy to be surprised by meal'.

The interior of Odessa-Mama was designed by the Sundukov sisters and United Kitchen & Fresh. Of course, the sea is the main theme - the prevailing blue colour range, the interior decorated with various shipboard units and components, and the WC-room made from sea carriers. Add Odessa cuisine specialties like tul'ka malosolnaya - soft-salted Black sea sprats (yum!) or zhareniye bychki - fried goby fish  (yum-yum!), and you will feel like you are at a sea resort, just without the sea and seagulls.

It is to note that Odessa cuisine is, in the first place, carefully and thoughtfully cooked meals, never made in a rush. A guy comes back from work and does a slapdash cooking - this is not Odessa cooking style. 'Carefully and thoughtfully' means not using hot spices like turmeric, lots of red and black pepper and alike with their strongly pronounced flavors that kill the taste of important ingredients. The menu enlists typical Odessa dishes based on Jewish home cooking - Poussin chicken stuffed with dried apricots, Mackerel baked with onion, Grilled mullet, Sauerkraut draniki (potato pancakes) and Vorschmack - herring pate. Apart from this, the cafe offers Meatballs Greek style, 'Nautical pasta' (pasta with minced beef and pork) and salo to serve as an illustration to how to organize life well in a multinational city so that all stay safe and sound.

Odessa-Mama café wishes when coming here every customer feels like a sailor returning back to his home-sweet-home city after long sailing. It is a place where all miseries disappear with the flow of positive mood, forshmak (meal) and khrenovukha (liqueur) and dissolved in the waves of green schi with calf ribs. Molecular cuisine? Ducan? Omnivore? None of these fiddle-faddles! Pick kartoshka so shkvarkami (potatoes with pork rinds) or mackerel with onions. And, holy mackerel! - We wish you all well!