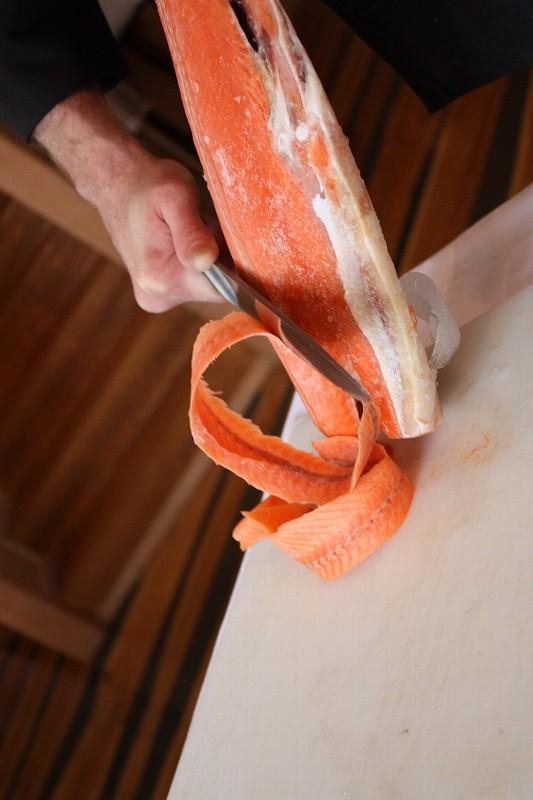 La Maree is a chain of three fish restaurants – two are situated in central Moscow while the other on the Rublyovo-Uspensky highway in Zhukovka. The location of each of the restaurants can be seen by clicking on the map link above.

As the main supplier of fish and seafood to Moscow restaurants and shops, La Maree naturally use the most stringent quality standards for their own restaurants. In all the restaurants with the La Maree chain, you will find a wide assortment of the best fresh fish and seafood imported to Russia from France, Italy, Norway, England, Tunisia and Morocco. These are imported on a daily basis.

In addition to the delicious meals in the La Maree restaurants, they als have a fish shop which is an integral part of the restaurant. In addition to the dozens of types of rare fish and a half dozen varieties of oysters on display, you will also find the best olive oil from Italy, France, Tunisia and Spain with a 15-year balsamic exposure...as well as delicacies such as foie gras, truffle cream, ham and Parisian chocolate.

The head chef of the La Maree restaurants is Abdessattar Zituni. He is a top professional of his trade with forty years of experience in top restaurants around the world.

The secret of the restaurant La Maree is that all the raw food is of the best quality. There is not need of fancy recipes to reveal the taste of fresh and quality fish. A delicious Frito Misto is just as you would find it on one of the small coastal restaurants of Marseille where they cook the same morning caught fish and seafood.

In 2007, the restaurant La Maree joined the prestigious Guild of French gastronomy 'Chaine des Rotisseurs', the oldest of the currently existing culinary associations. The history of 'Chaine des Rotisseurs' dates back to 1248 and to San Luis Rey. Today, under its auspices, it unites restaurants in 200 countries and nearly 100,000 gourmets, each of which undertakes to promote the art of cooking.

For five consecutive years, La Maree has also been rated by the American magazine ‘Wine Spectator’, for their ability to preserve and enhance the highest level of cultural formation of wines with the appropriateness of the gastronomic world and the concept of regional trends.

Stroganina - a typical dish of northern cuisine (this is a kind of frozen Siberian sashimi).

Quality raw fish is served frozen and expertly cut into long thin slices. A classic sauce called 'Makalo' is also served with this delicious dish that exquisitely melts in your mouth.