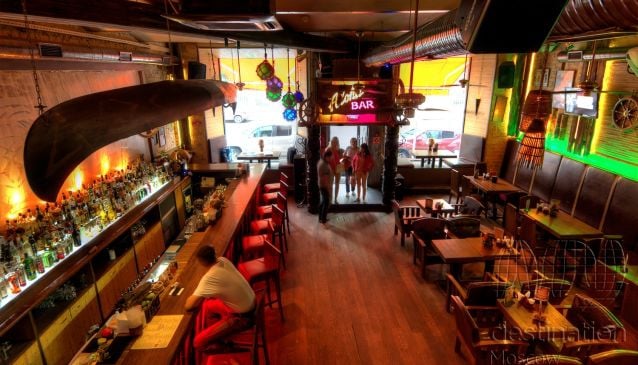 Aloha!
At last, a tropical paradise has been found in Moscow! Peace and harmony of an exotic island and Hawaiian spirit await you in a true Hawaiian bar. Sounds of waterfall, surf boards parked at the walls, laid-up boat... All of it can be found at Aloha Bar, opened at Myasnitskaya Street by its creators, Dmitriy Sokolov and Maksim Lesovik. Aloha is a true tiki bar, completed with tranquil exotic design and royal range of rum from the Caribbean.
The concept of Hawaiian bar, or tiki bar, was born from two absolutely incompatible parents: a strict father Prohibition and a boisterous mother Cuba. Their first child came into being in 1933 in Los Angeles, when American hellbenders returned to their homes from the famous sunny island, having taken along the main attribute of tropical drinking habits - rum. On the tide of enthusiasm about cocktails in general and everything exotic in particular, Don the Beachcomber, the first tiki bar, appeared. But it's not only the mixed drink list that was reproduced: in fact, the interior was to resemble a tropical life to a maximum degree, complete with palm trees, boats, umbrellas and other trivia. Original tiki bars flourished during about 30 years, but soon, they went out of fashion. In 1990s, the culture was revived, thanks to a new generation of fans of tropical parties with alcoholic beverages. Then, new tiki bars were created all over the world, drawing inspiration and ideas from such legendary bars as Donn the Beachcomber.
The Aloha menu gives you an opportunity to travel everywhere you wish, from the Thailand coasts to the continental South America. And various types of soup, Hawaiian sandwiches, refreshments, meat dishes, fish and other seafood will perfectly accompany the feast of cocktails and rum.

And now, a few words about cocktails: the most important things about them is that Dmitriy Sokolov still sticks to a tested formula of 'a well-priced drink in the hub of the city'.  And well-priced drinks here include classic tropical cocktails such as Daiquiri and Piña Colada as well as Sokolov's trademark mixed drinks, for example, Royal Hawaiian with vanilla rum, coconut puree and grapefruit liqueur, or Pink Scorpion Bowl based on gold rum, brandy, orange liqueur and cranberry syrup. A couple of such 'royal Hawaiian' drinks - and you will undoubtedly hear the roar of the surf even in the busy city center.