The Moscow metrois one of the most worth seeing attractions in Moscow because it's a beautiful historical piece of architecture mixed with modern design: high ceilings, solemn chandeliers, golden embellishments, arched gates, mosaic pictures, paintings on the walls and a lot of details one should surely look at!

There are some exclusive trains going central lines: the train which is wholly devoted to the victory in the Second World War (1945), marked with red colours, the 'library' train with famous quotes on the carriage walls and funny pictures about reading.

Almost each central station is a unique example of Soviet monumental style, it's really a museum of wonderful articles: mosaic ceilings of Mayakovskaya station, illuminated pillars of Kropotkinskaya which show dynamics of the architectural concept, expressive sculptures at Ploschad Revoluzii (Revolution Square). By the way, don't miss the famous sculpture 'Frontier Guide with the dog', if you rub the dog's nose your dreams will come true. Nobody exactly knows the reason why the dog's nose has magic power but as you will see bronze paint has come off, so each day thousands of passengers touch it and make their wish, join them and try it too! 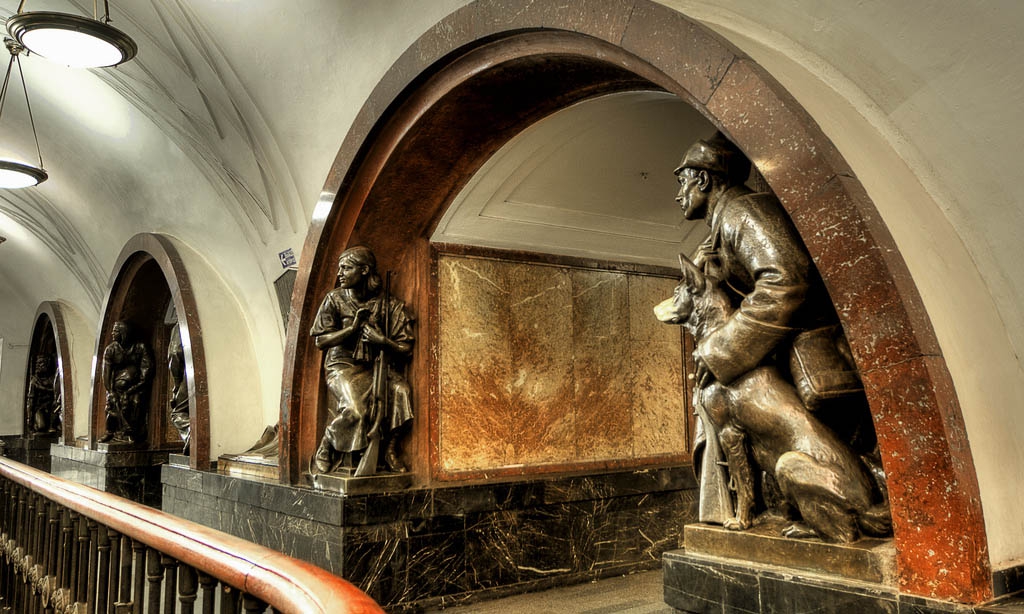 Marble is used to decorate about one half of all the metro stations, along with other types of stone. For this reason, the Moscow metro will probably last forever. The marble used was brought from all over the former Soviet Union from places like the Ural Mountains, Altay, Middle Asia and the Caucasus.

The black marble from the Urals, Armenia and Georgia decorates the walls of such Metro stations as Byelorusskaya, Ploshchad Revolutsii, Elektrozavodskaya and Aeroport. The shades of deep-red marble from Georgia contribute to the solemn beauty of the Krasnye Vorota metro station.

Some new stations such as Dostoyevskaya, Maryina Roscha are also interesting to see. Dostoevsky is a famous Russian writer so the station is designed as a picture gallery with his heroes and plots. Maryina Roscha is a collection of amazing mosaic pictures which show still life, nature beauties. That contrasts the underground atmosphere and makes a strong impression on any viewer.

Tickets and cards can be easily bought at the metro ticket office or by a ticket machine for one or two ride journeys, one way ticket is 40 rubles.

The metro serves about 7 million people every day. The trains come by very quickly, about every minute or so during peak hours. It is probably the number one form of transportation for the most Muscovites, and with help of trolley buses, provides by far the best way to get around Moscow.

Trains daily run from 6am to 1am. There is an information board (red and blue) at each station, passengers can press the button on the board and ask for directions.

Remember that travelling by metro is much better at the weekend because Moscow is a megacity and in rush hours on weekdays it will feel rather uncomfortable while at the weekend it is much less crowded.