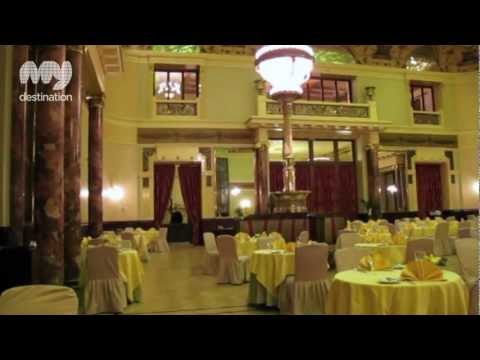 A stay in the Metropol is so much more than simply a chance to rest and relax. It is an         opportunity to travel back in time through Russian history to the beginning of the 20th       Century. The site was originally acquired by a man named Savva Mamontov, who planned to create a grand cultural centre that would encompass a theatre, restaurant, winter garden, ticket offices and accommodation for actors. Mamontov was a great patron of the arts and discovered well-known artists such as Mikhail Vrubel and singer Feodor Chaliapin. Work began in 1899 to turn his dream into reality. But it was not to be. Shortly after work began, Savva Mamontov was imprisoned for alleged fraud, his assets were seized and his original plans and designs were dropped.

And the bad luck continued. A fire in 1901 reduced the building to a shell and it had to be completely rebuilt. The building you see today is the result of collaboration between an eclectic mix of architects and artists, including Englishman William Walcott, Lev Kekushev and Mikhail Vrubel. One of the most striking artistic features of the Metropol building is Vrubel's elaborate and haunting 'Princess of Dreams' mosaic panel, which adorns one side of the building.

The hotel opened for the first time in February 1905 and quickly became a favourite haunt for eminent Russians and members of the intelligentsia, as well as hotel of choice for many foreign visitors. In its early days before the revolution, the Metropol is said to have played host to names such as Valery Bryusov, Sergey Rachmaninoff and the great Feodor Chaliapin, who is reported to have delighted his fellow restaurant guests with an impromptu performance.

The Metropol's hotel status initially lasted just over a decade. Following the Revolution, it became the Second House of Soviets and a place of residence and work for the new party leaders. In the former hotel rooms the first Soviet constitution was conceived and the words to the USSR anthem were penned. The main restaurant became a conference hall and bore witness to speeches from the likes of Lenin, Trotsky and Sverdlov.

In the 1930s, the building became a hotel once more and has stayed that way ever since. Over the years the Metropol has played host to many prominent politicians, members of royal families, famous actors, writers and sports people, including King of Spain Juan Carlos, ex-presidents of France Jacques Chirac and François Mitterrand, former leader of North Korea Kim Jong II, opera singer Montserrat Caballé, pop singer Michael Jackson and actors Gerard Depardieu, Arnold Schwarzenegger and Sharon Stone.