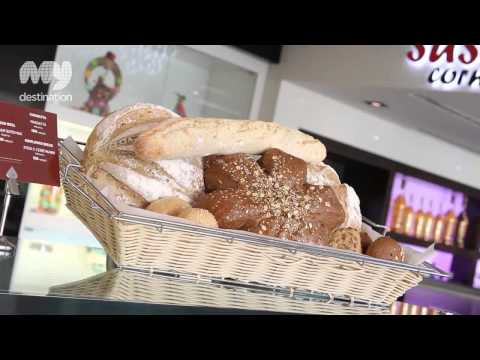 The curving silvery 12-storey building looks like something out of a sci-fi movie - especially with the silver UFO-like dome in front. This futuristic architectural ensemble is actually a cosy place to stay when visiting the Russian capital - the Azimut Hotel Olympic Moscow.
This modern 4-star hotel is one of the city's largest and is a particularly good choice for business travellers.

The 492 rooms all come with an equipped work space, complimentary Wi-Fi and wired high-speed internet, as well as other comforts such as satellite TV, air conditioning, iron, ironing board, safe, tea- and coffee-making facilities, sound-proof windows, bathrobe, slippers, mini-bar and, of course, a comfy bed. Other extra luxuries are provided depending on the class of accommodation - there's even the Executive floor with its own reception and other exclusive services.
The hotel boasts meeting rooms and multifunctional conference halls fitted out with state-of-the-art audiovisual equipment and other mod-cons such as simultaneous translation set-ups.

There are cafes and restaurants year-round plus the Summer Garden terrace for al fresco drinking and dining in the warmer months. Guests can stay in shape at the hotel's sport and fitness complex, with a swimming pool, gym, saunas and jacuzzi. For a special indulgence, there's a Thai massage salon offering a selection of invigorating and muscle-relaxing massages - traditional, with oil, for the neck and shoulders, for the feet, and even one with hot herbal sacks. Other on-site services include a floristic salon, ATM with exchange facilities, laundry, dry-cleaning, complimentary newspapers and parking.
The Azimut Hotel Olympic Moscow is located about 15 minutes' drive from Red Square, the Kremlin, the Bolshoi Theatre and other city-centre attractions, all easily accessible on the hotel's free shuttle bus. There are also metro stations nearby and, for the energetic, the option of walking into town.

Interesting sights in the hotel's immediate vicinity include the beautifully landscaped Yekaterininsky Park with its picturesque duck-filled lake, the Olimpiisky Sports Complex built for the 1980 Games, the renowned Nikulin Circus on Tsvetnoi Bulvar, the Durov Animal Theatre quirkily decorated with playful motifs, and the sombre Central Museum of Armed Forces which is guaranteed to impress history buffs.