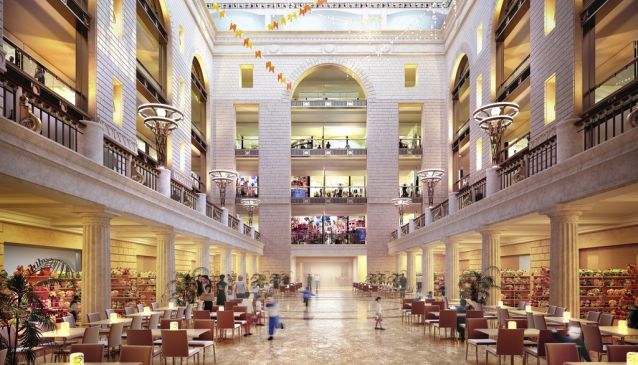 The Central Children's Store at Lubyanskaya Square has opened after a long reconstruction. The building is an architecture monument. It was built in 1957 at the place of a former trading quarter. During the renivation unique construction elements of 1957 -- the three-stairwell loggia located at the Lubyansky facade, which was lost in the 1980th years, stained-glass windows with Ivan Bilibin and Aristarkh Lentulov's pictures, the original ceramic tile, the granite plinth at the facade and window openings are recreated. Historical elements of the interior, such as marble rail-posts in the atrium, oak doors and unique bronze floor lamps were also restored.

The biggest in the world mechanical clock made of gold, aluminum, steel, copper and brass by Petrodvorets Watch Factory «Raketa» became decoration of the central atrium. Gross weight of the clockwork is 5 tons, and its size is 6 by 7 meters, the pendulum length is 13 meters. These clocks will be included in top-5 biggest mechanical clock of the world, such as Big Ben, the Kremlin Chiming Clock, the Prague Tower Clock and Guangzhou Clock. It may become one of the main sights of Moscow.

Besides many shops, the Children's Store will host a museum of toys, a movie theater and an observation deck overlooking the Kremlin and the Red Square. There will be interactive zones with training programs for children, including a space playground, a virtual aquarium, a library and a magic tape on each floor.

For the visitor's convenience, the second exit from the Lubyanka metro station will lead directly to the building. In addition, -1 floor will accommodate underground parking, and 7 floor will host a food court.