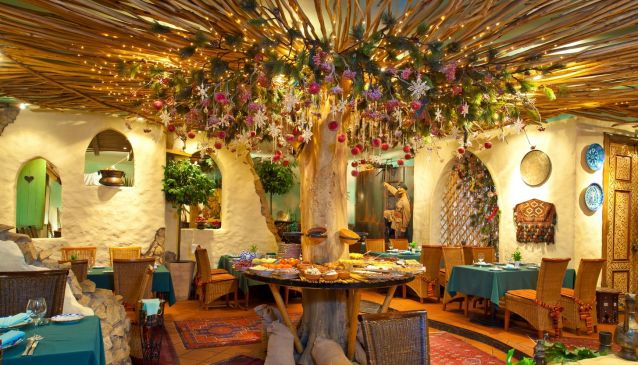 White Sun of the Desert

The restaurant is named after the legendary film of Soviet Union 'White Sun of the Desert'. It is one of the first themed restaurants in Moscow, decorated totally according to the cult film. You can see a man with a gun at the entrance, free Eastern women in national dresses inside the restaurant. The bar walls are decorated with breaking-off plaster, carpets, ancient guns, and musical instruments. The Menu is presented by the Uzbek, Arab, Azerbaijan, and Chinese cuisine. Dastarkhan (the Eastern open buffet) is a 'visiting card' and flavor of White Sun of the Desert.
All dishes are prepared according to centuries-old national traditions of the East: shashlyk (barbeque) is charbroiled even in winter and served in a special 'taganchyk' with hot coals; the flatbread is baked in crockery tandyr. And the pilaw is the main dish of Dastarkhan, it can be prepared with apricot halves or raisins at the guest's will. The Chef will always find some exclusive recipes for the oldies and new friends.