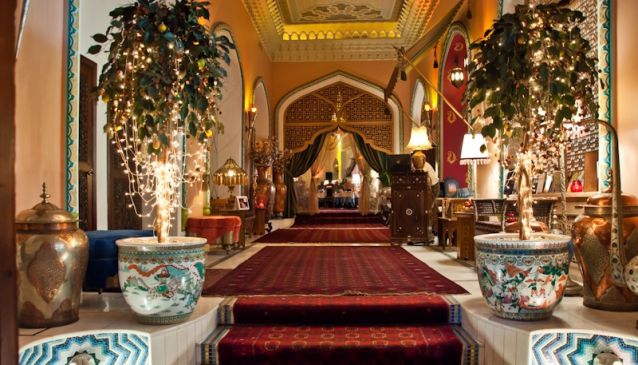 According to Moscow historic archives, the first reference to this building dates back to the end of 19th century. Initially a popular tavern was opened here. Then the building was purchased, and a French café appeared at that place. After the revolution, that place was known as an officers' mess. Since 1951, the Ministry of Commerce of the Uzbek Soviet Republic adopted a decision to open a restaurant, which was named 'Uzbekistan'. This is the beginning of its history. The restaurant of Eastern cuisine was always popular among Moscovites.

In 1997 Arkadiy Novikov, the new owner of the restaurant, totally updated the building. All you can see here is made by renovators, specially invited from Tashkent.
Uzbekistan is situated in a historic building in the heart of Moscow. The Menu is presented by the Uzbek, Arab, Azerbaijan and Pan-Asian cuisine. As well as 62 years ago, today all dishes are prepared according to centuries-old national traditions: shashlyk (barbeque) is not gruilled, but charbroiled even in winter and served in a special 'taganchyk' with hot coals. The flatbread is baked in crockery tandyr all day long. Making the pilaw is a true art: special sorts of rice are used in strict proportions. The main craftsmanship is making the meal light. The pilaw is served by the Chef, who can tell about the unique history of this national meal.
Some national dishes are prepared in front of guests - the mountain lamb pickled in cognac and spices is spit-roasted. Several hours the foil-wrapped lamb is being turnspat, then the chefs treat the guests solemnly with a piece of tender flavorful meat.