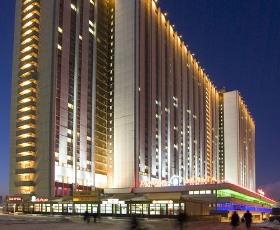 The Izmailovo Gamma – Delta complex is a large three-star hotel with space for more than 3500 people, with two separate hotels that share a lobby space. The hotels are part of the larger Izmailovo Complex that was built in 1979 as part of the preparations for the 1980 Moscow Olympics. The complex has extensive conference facilities. Guests can choose from a wide variety of restaurants, including several with Russian themes, an Arabic dessert shop, and several casual options. There is a fitness centre and a spa. Other entertainment options include a billiards hall and a bowling alley. There is a metro station at the complex. The complex has three other hotels.