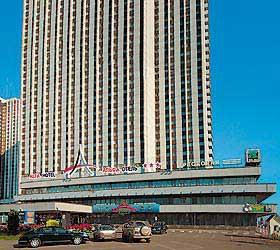 The Izmailovo Alfa by CTOs is a large four-star hotel that is part of the larger Izmailovo Complex, built in 1979 as part of the preparations for the 1980 Moscow Olympics. The complex is home to a weekend market with a large variety of Russian gifts and souvenirs. The hotel was renovated in 1998. This 24-storey hotel has a thousand guest rooms. There are several restaurants, including a sushi bar. Entertainment options include saunas, shopping, and billiards. There is a metro station at the complex. The complex has three other hotels.