A Journey to Suzdal

The museum features some peasant houses that are about 100 years old.

In the summer we decided to visit the ancient museum-city of Suzdal, one of the oldest cities in Russia and one that has preserved its unique character to this day.

The route chosen was as follows: Moscow to Pereslavl-Zalessky to Suzdal via Yuryev-Polsky.

The road to Suzdal from Pereslavl is not busy and runs through scenic villages, fields and woods. All of this gradually immerses you into a historical atmosphere. 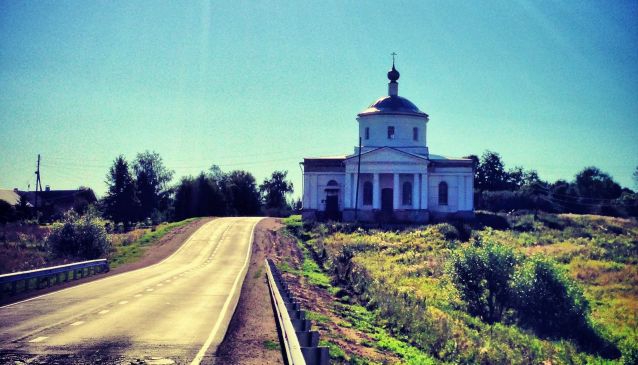 As we entered Suzdal, a beautiful view of the city lay before us.

Suzdal was first mentioned in chronicles in the year 999. In the middle of 11th century Suzdal became a major commercial and manufacturing centre, as it was located on the Kamenka River, which at that time was a trade route. During the reign of Yury Dolgoruky, Suzdal became the capital of the Rostov-Suzdal principality.

Suzdal saw active building take place in the 16th-17th centuries. It was during this time that all the existing architectural ensembles were built, the best of which are the ancient Kremlin, and the Pokrovsky and Spaso-Evfimiyevsky monasteries. During the second half of the 19th century, Suzdal became an isolated provincial town. No industry developed in the city – in no small measure due to the fact that Suzdal was not located on a railway line. On the other hand, this was one of the reasons why the architectural appearance of the city has remained intact. 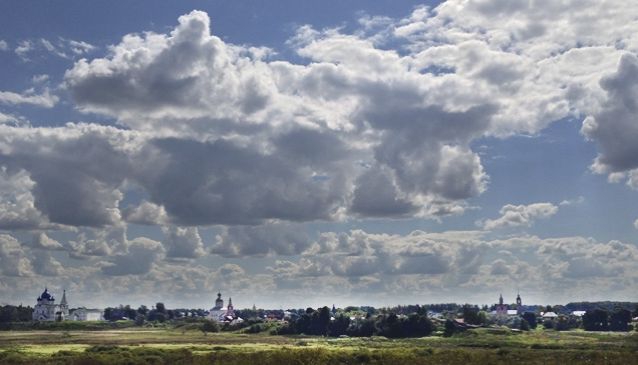 Today Sudzal is a 'museum town': there are over 200 architectural monuments from the 12th-19th centuries. Suzdal's streets are located on the banks of the Kamenka River, which zigzags through the city. The buildings in Suzdal are mostly one-storey (there are no high-rise buildings at all) and many of them are wooden or clad in wood specifically to maintain the town's unique style. The natural wood and white stone walls of the monasteries are the hallmarks of Suzdal. The city's main attractions include five monasteries, more than 15 churches, the Suzdal Kremlin architectural ensemble, the shopping arcades and the Museum of Wooden Architecture and Peasant Life. 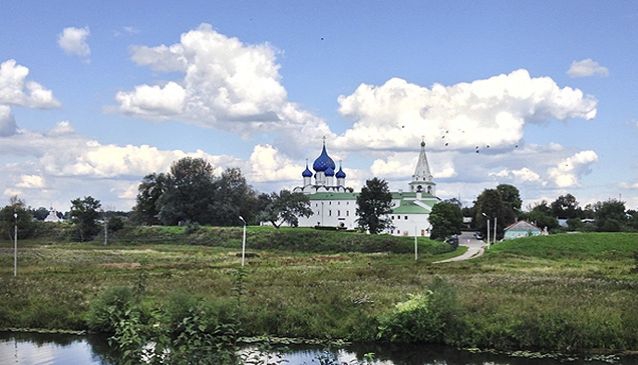 Reaching the end of the Kremlyovskaya Ulitsa, you will run into another white-stone wall with battlements. This is the Suzdal kremlin – the oldest part of the city. According to archaeological excavations, it was at this spot at the end of the 9th century that the first settlement appeared, which later gave rise to Suzdal.

Up until the 12th century, the city was located on the territory of the present-day kremlin.  The fortress was built at the turn of the 11th-12th centuries, when Vladimir Monomakh built the cathedral and buildings of the princely court here. A deep moat cut across the bend of the river, making the kremlin area of the town an island. The fortress was surrounded by a ring of earthen ramparts running a distance of up to 1,400 metres. They are well preserved, except for the uppermost portion, which was removed in the 18th century. Wooden walls with towers ran along the tops of the ramparts. The eastern side of the kremlin, which faced on to a plain and thus represented the most vulnerable point for an enemy attack, was reinforced with special care. The wide eastern moat has been well preserved. Its depth reaches 17 metres.

The kremlin's wooden fortifications did not survive to the present day, although over the centuries they were persistently rebuilt in the fight against the Tatars and the Polish-Swedish invaders. According to records from 1628-29, the kremlin boasts 14 tent-roof towers, two of which were entrances. In 1645, the Moscow fortification constructor Nikifor Beklemishev rebuilt the kremlin's fortifications, but they were destroyed in a fire in 1719. 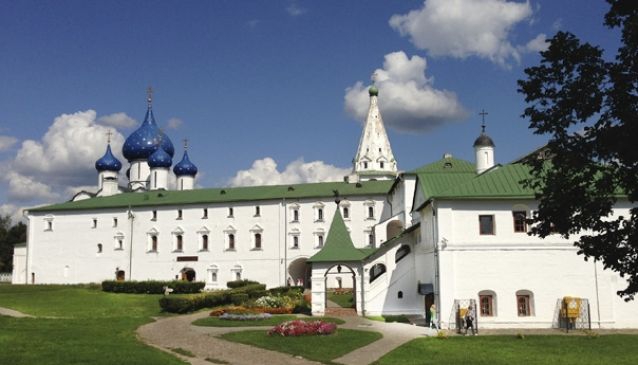 The city's oldest surviving ancient church is also located here: the Cathedral of the Nativity of the Virgin. It was built by Grand Duke Georgy Vsevolodovich in 1222-1225 on the site of the dismantled Uspensky Church.

The cathedral has kept its golden gate from the 13th century, decorated using fire gilding, its magnificent iconostasis of the 17th century, the pride of the temple – the 'king-lantern', which weighs about 160 kg, ancient paintings and holy vessels.

According to dictates of Bishop Serapion, in 1635, to the south of the Cathedral of the Nativity, the cathedral bell tower was being built. Together with the powerful domes of the church, the bell tower played an important role in the composition of the city skyline. In those days it was the tallest building in Suzdal – a huge octagonal pillar, covered with a giant tented roof. There are large windows at the top of the pillar – 'bell stations', hung with bells, and at the end of the 17th century clocks were installed, striking not only every quarter hour and hour, but every minute. The row of bells was covered by a flat roof, out of which sprouts a huge tented roof. It is an ancient approach to wooden architecture. 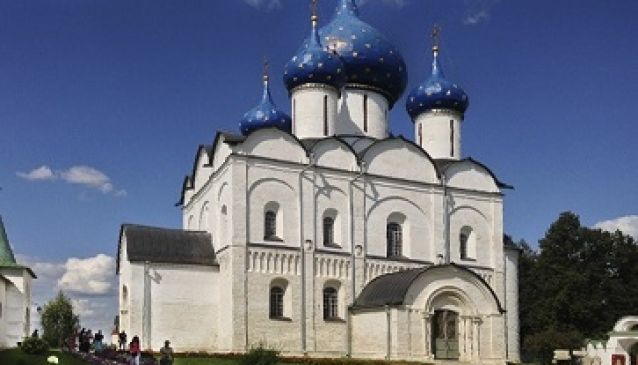 At the end of the 17th century, a chapel was built connecting the bell tower with the Bishop's Chambers with easy crossings on the three large spans. At the same time, the north side of the bell tower was enclosed by a concourse, creating a cosy cathedral courtyard. Behind the kremlin curves the slowly flowing Kamenka River, with its smooth surface reflecting the surrounding beauty like a mirror. 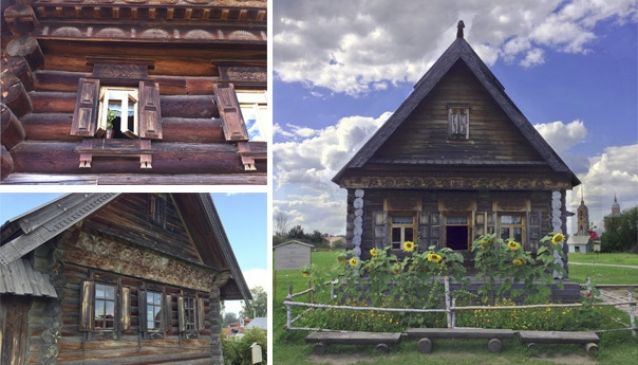 After going over the bridge across the river, you reach the Suzdal Museum of Wooden Architecture and Peasant Life, which displays wooden architectural monuments from different eras. A stroll there is both pleasant and informative. The museum is designed in the form of a village with a street featuring houses, churches and other buildings.

The museum started with the Transfiguration Church from 1756. It was moved here in 1966  from the village of Kozlyateva in the Kolchuginsk district. Next added was the Resurrection Church and bell tower from the village of Patakino in the Kameshkovsky district. An architectural ensemble was created that is typical of Suzdal. The museum features some peasant houses that are about 100 years old. 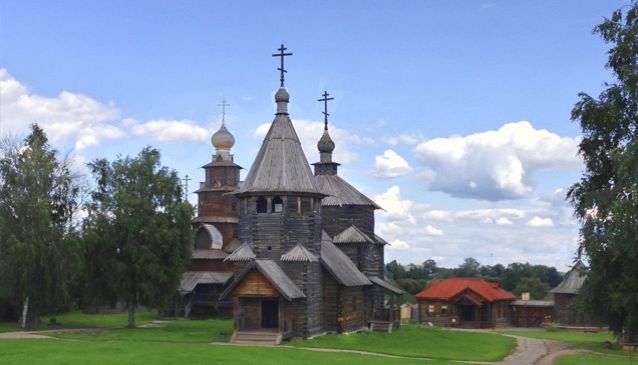 Spaso-Efimiyev Monastery was founded in 1352 by Suzdal-Nizhny Novgorod Prince Konstantin Vasilyevich. In the 16th century, it became one of the largest monasteries, not only in Suzdal, but also one of the five largest monasteries in Russia. The scenery surrounding it is truly delightful – because the monastery is located directly on the steep bank of the picturesque Kamenka river – which is why centuries ago the location of the church was regarded as particularly advantageous (an easily defended area).

The monastery's first abbot was Evfimy, a companion of Sergei Radonezhsky. In the 16th century, Evfimy was canonised. His name was included in the name of the monastery. In 1445, beside the walls of the monastery a battle took place between the Moscow Prince Vasily II (the Dark) and the Tatar Khan Ulugh Muhammad. Vasily II was defeated and taken prisoner. At the beginning of the 17th century, in times of turmoil, the monastery was the camp of Lisovsky, and from where he made ​​forays into many Russian cities. In 1642, in the family vault of princes Pozharsky and Khovansky, who were closely associated with rich grants to the monastery, the Russian national hero D.M. Pozharsky was buried. 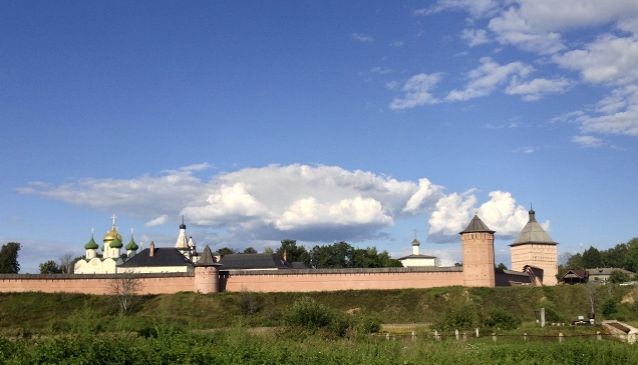 In 1767, the Spaso-Evfimiyevsky Monastery housed the state prison for lunatic convicts. The prison ceased to exist during 1905-07. Architecturally, the belfry of the Spaso-Evfimiyev Monastery is the only one of its kind. Its right-angled-walled three-bayed bell station is attached to the tower-like 'bell church', and resembles the Pskovsko-Novgorodskiye Belfry, but with the typical Suzdal gauged brick patterns of the 17th century.

To the south-west of the Spaso-Preobrazhensky Cathedral is a very rare and valuable monument – the tent-roofed Uspenskaya Trapeznaya Church of the 16th century. It is an indigenous type of church in which the Russian masters completely moved away from the cross-domed Byzantine system. 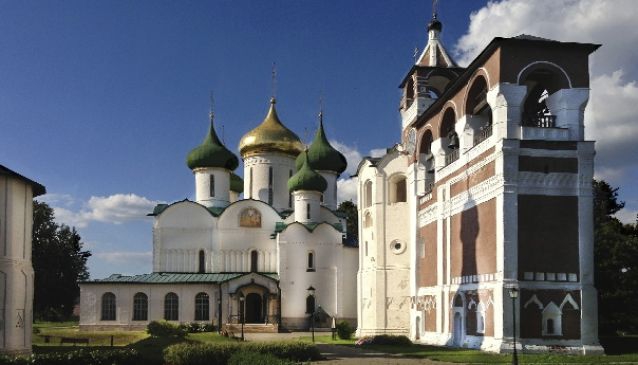